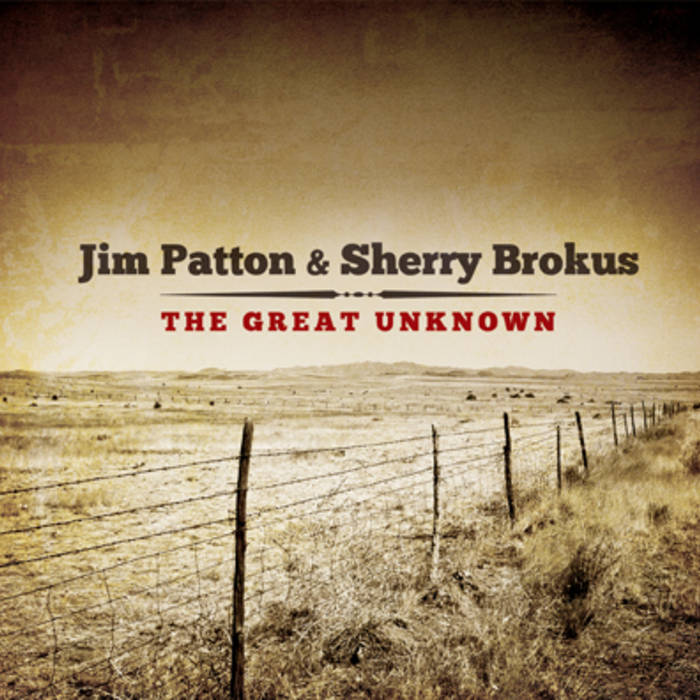 “I met Jim and Sherry when I first moved to Austin in 1998. I had the opportunity to work on a record with them and I’m glad it worked out. They are so passionate about their music. I’ve always been drawn to artists who write about their life experiences, and that’s just what Jim and Sherry do. I’m glad to be a part of their music.” - Lloyd Maines

In his early 60s, an age when most singer-songwriters have been in decline for a decade or more, Jim Patton has improbably deepened and broadened his art. For his new album with his wife and longtime musical partner Sherry Brokus, The Great Unknown, Patton has crafted 10 new songs that do more than explain himself to his listeners; these songs explain those listeners to themselves. For many years Patton has shined a revealing light on his own past and the inside of his own head. But with this record, he aims his flashlight into other skulls and into the future. The Great Unknown, indeed.

The new album begins with one of his best-ever songs, “On the Day I Leave This World,” which allows him to imagine his eventual, inevitable death. It’s a surprisingly humble song; it doesn’t describe that death as a momentous event but rather as another turning of the page. Some friends will be sad, but dogs will go on chasing squirrels as they’ve always done; “This merry-go-round will keep on spinning.” That balance of sadness and naturalness is tricky to capture, but Patton does it not only in his writing but in his vocal as well.

Patton’s willingness to climb inside other people's heads has created an expanded role for Brokus in the duo's music. For the first time on one of their albums, she takes more lead vocals than he does, and her long career as a therapist allows her to convincingly assume the personas of the troubled narrators of “Drown” and “I’m Alright Now.” Neither she nor her husband have ever suffered the addiction and trauma of these two men, but they’ve been close enough to understand it and articulate it as the men themselves never could.

There are similar songs about ex-lovers who can’t let go, brow-beaten children who can’t forget, middle-aged rock'n'rollers who won’t give up. All these characters want to reach new territory, unknown and perhaps greater than anything they’ve known, before the day they leave this world. “It’s easy to show when someone has a problem and when someone has overcome the problem,” Brokus says, “but it’s getting from point A to point B that's hard to describe.” But that's just what Patton and Brokus capture in these songs, thanks in large part to the terrific Texas musicians who frame their voices: producer Ron Flynt, lead guitarist Mary Cutrufello, mandolinist Marvin Dykhuis, fiddler Warren Hood, cellist Julie Carter and percussionist John Bush.

In memory of Tim Henderson, Mike Watters, and Dick Walker.
Your presence is all through this record, as well as our lives.

special thanks to Jeff Talmadge,
who played the role of Maxwell Perkins in the birthing of the CD.

Jim & Sherry would like to thank:
everyone who played on the record, played in the band, recorded us, promoted us, gave us airplay, loaned us money, came to the shows, listened to the songs, bought our records, put us up for the night, or otherwise helped us on our way. You are too numerous to mention individually, too important not to mention at all.